Shadows of the Great Game-Part 1

Bishkek to the Pamirs by way of Kashgar 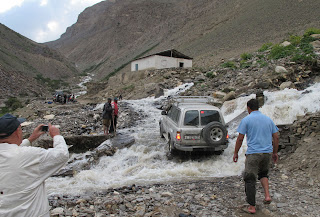 Four factors promoted our interest in a trip to the Pamirs.
— When writing the essay for Himalayan Portfolios: Journeys of the Imagination I had become intrigued with the role the Pamirs played in the 19th century struggle between British India and Russia known as the Great Game. One major player in the drama was Francis Younghusband who later became a major force on the Everest Committee. The Great Game came to a provisional accomodation in 1893 when the boundary of Afganistan was drawn to leave a thin extension of Afghanistan, the Wakhan Corridor, as a buffer between the Russian and British spheres of influence.
— A second reason was the account by Greg Mortenson of his struggle to build a school near Bozai Gumbaz in the Whakan Corridor described in his recent Stones into Schools (now available in paperback.)
— A third reason was the result of looking at satellite images of the Afghan-Pakistan region. The one thing that stands out amidst the mountains is the hook of the Afghan boundary defined by upper ancient Oxus (see map in previous blog.) Why is this river so much more visible than the Indus? The sources of the Oxus have been assigned to a lake in the Little Pamirs that is drained by the Pamir River and to a glacier that feeds into the Whakan River. The two rivers join to form the turbulent Panj River that eventually, after more additions, becomes the Amu Darya that makes its way to the dead end of the Aral Sea.
— Lastly, it seemed that the culture and history of the region could have a great deal to do with future events in Afghanistan (Betty's department. Betty is my wife.)

Our road trip began in Bishek and took is south across Kyrgyzstan. The last part was through a high-altitude grassland smudged with occasional flocks of sheep and cattle and small gatherings of isolated yurts. We stayed at a yurt camp near the ancient fortress and caravansary of Tash Rabat that is separated from the wider grassland by the Dragon Mountains. 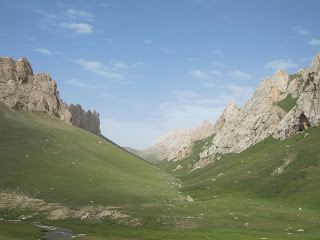 Near the Chinese border there were snow capped peaks (the Celestial Mountains, Tien Shahn), but they were obscured by a haze of loess dust that was unrelated to the dust churned up by the enormous Chinese trucks that travel the highway. The highway was, no doubt, once paved. The process of crossing the border involved multiple check points each of which involving a ritual of multiple passport inspections. We were checked and rechecked both before and after passing through a winding section of no-mans-land. A long dusty descent invigorated by miles of road construction brought us to a final inspection, with photographs added to the file, and to Kashgar.

In reading the narratives of British visitors to Kashgar the Chinese name for the region, Xinjiang, tends to be replaced by ‘Chinese Turkistan’ or ‘Tartary’, but Kashgar was its own center of power, hence the term Kashgaria. Local Uyghur nationalists call it Uyghurstan or Eastern Turkestan thus linking it with other Turkic regions rather than to China or Tibet. Silk Road traders came through Kashgar because it was the junction of the branches of the road that flowed to the north and south of the Taklamaken desert.

It is not easy on visiting Kashgar to imagine the old city with 50 foot high mud walls as it was in 1940 when the noted climber and writer Eric Shipton was sent there as British Consul General or in 1946 to 48 when he served a second term (in Mountains of Tartary.) His task on the second occasion was to hand over the Consulate to India and Pakistan; they were newly independent and unclear how they should deal with their new responsibility to look after the interests of wandering traders from Ladakh and Hunza. By October of 1949 the Chinese Communists had taken over from the Nationalists and the consulates in Kashgar had a new set of problems to deal with. 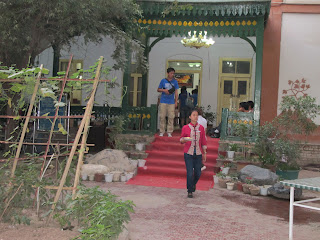 The Consulate building remains; it is now a restaurant. The massive willow tree that must have dominated the garden still stands. The former Russian consulate is also a restaurant.

Both consulates date back to the Great Game period. When Francis Younghusband in 1887 made his epic journey across China that led him to the north side of K2 and to Srinagar by way of a high Karakoram pass he was surprised to find a Russian Consulate in Kashgar. When he invited the Consul General to tea the consul arrived with 16 Cossack carrying Russian flags. Younghusband had a second notable encounter in 1891. He was sent to Kashgar and from there proceeded to Bozai Gumbaz in the Pamirs where he encountered a force of 30 Cossacks and an unambiguous declaration that this was Russian territory. This convinced all concerned that Russian expansion was a serious matter. The borders of Imperial Russia were close to Kashgaria, Chinese power was weak and the British territories were on the other side of high passes. (See Tournament of Shadows, Meyer and Brysac, 1999; Younghusband, Patrick French, 1994)

The rule of the Tsar gave way to the Soviets and the Soviets were intent on rearranging Central Asia. Peter Fleming (the literary uncle of James Bond) in “Report from Tartary” described the political situation when he arrived at the Consulate in 1935. He set out from Peking traveling to the south of the Taklamaken desert to reach Kashgar at a time when the situation in the province was almost totally unknown to the outside world. There were, in fact, a series of warring factions that included Manchurians, White Russians, Turkis and Tungans. The Soviets were deeply involved: there were Russian advisors in Kashgar and Umruchi and the national government exerted little control. Kashgar was run by a local warlord in cahoots with the Russian Consulate aided by the advisors and the warlord's secret police. When in 1940 Eric Shipton arriving for his first stint as a consul he found the Soviets equally present. It was wartime and it was uncertain whether the Soviets were friend or foe. The Chinese Republican government in Nanking was still very far away.

Later when the Chinese Communists came to power the Russian advisors seem to have gradually departed. There were various uprisings. There was a brief attempt to set up a Turkik Republic in Khotan, but the overall consequence seems to have been a steady influx of Han Chinese. The Great Leap Forward beginning in 1958 led to starvation in central China and this encouraged the Han migration into Xinjiang. In 1960 this pressure caused Uyghurs to flee to the Soviet Union. A major migration of Han Chinese started in 2,000 as an 'Open the West' campaign. The immigrants were deployed to ensure that they were a dominant force in each regional subdivision and along all major routs. The influx of Han Chinese has consolidated the native population under a Uyghur identity and brought together groups that were formerly diverse. They have learned to speak the same coded language. The Chinese recruited cadres of Uyghurs that would be loyal to the government.

There are crumbling bits of the city walls of Kashgar left, but the narrow lanes of the old city in front of the Id Kah Mosque were obliterated when the area was flattened by the Chinese administration to make a ceremonial plaza. This action promoted not ‘harmony’ but riots. When Colin Thuberon visted Kashgar in 2003 the plans for the clearing were on display (Shadow of the Silk Road.)Such tension between the native population and the immigrant Han Chinese came to the boil in Urumchi, the other major city of Xinjiang, in 2009. Rioting natives were met by vigilante Han mobs. The influx of Han Chinese has consolidated the native population under a Uighur identity brought together groups that were formerly diverse.

As result of these migration policies Kashgar has become a modern Chinese city with a major Han presence analogous to the dual community situation in Lhasa, Tibet. Kashgar does have some attractive older streets and these were not far from our Tarim Petroleum Hotel where we stayed. They were used as location sets in the filming of the Kite Runner. These older streets form a regular tourist area, though the activites are locally driven. However, we are still try 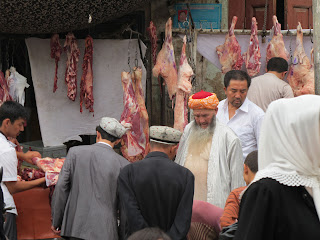 ing to puzzle out why someone was being paid to follow us around and take photographs of us taking photographs. The photograph shows our watcher pretending to be interested in photographing bread. 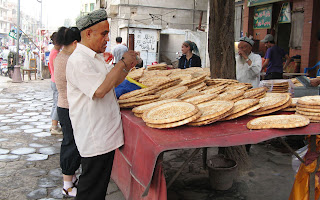 Since returning I have been reading The Uyghurs, Strangers in Their own Land by Gardner Bovington (Columbia UP, 2010.) His discription of the Chinese divide-and-rule policy fully explains why no one, including our guide, was willing to comment on the present political situation. The parallels to Tibet are not accidental.

The next stage was to reenter Kyrgyzstan by the Irkestam Pass--further to the south than our departure route.. The loess haze had departed, an unusual event, and for 200 km we passed by a paved road through desert hills layered in shades of red, yellow and purple. 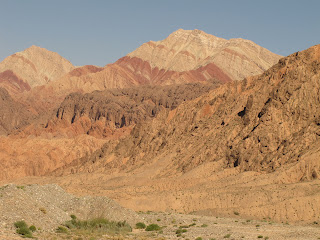 At the pass we once more went through multiple checks before entering a 7 km no-mans-land where we studied the long line of trucks enduring to endless wait until our new land cruiser's arrived. Beyond the border we entered a new realm of high altitude pasture, the Alay valley. 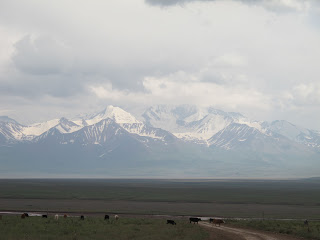 To the south a long line of snow capped peaks, the Trans-Alay range of the Northern Pamirs, arose abruptly from the grassland. Somewhere hiding in this vast landscape the Main Pamir Fault marks the line where the older basin rocks underthrust the northern Pamirs. This is also a suture line where the Northern Pamir terrain became attached to the Asian mainland. To the west along the border range is Lenin Peak (7,134 m /23,406 ft). 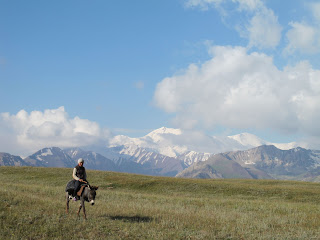 To this peak is attached an important example of the political reidentification made necessary by the break up of the Soviet Union. In Tajikistan Lenin Peak is now officially named after the Ismali physician and philosopher Ibn Sina, better known in the West as Avicenna (980-1037.) He belongs to the golden age of Islamic enlightenment. His vast achievements include an encyclopedia The Canon of Medicine, but he also contributed to astronomy, algebra, trigonometry and discussed the nature of experimental knowledge. In Dushambe he is represented by a statue. Most remarkably, the Russian built Opera House was featuring an opera about his life. 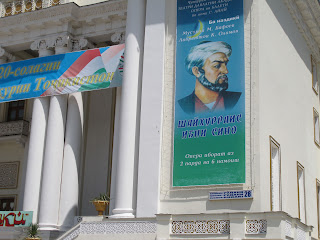 TO FOLLOW SHORTLY
Part 2: Journey to the Tajik-Afghan border.
Posted by kenneth Hanson at 6:30 AM 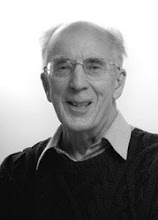 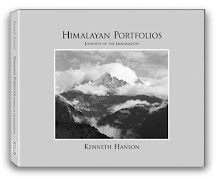